February 11 01:05:07, 2020
[Source: Gaogong LED's "LED Good Products" magazine April issue (P57)] BP series IC, with a number of independent intellectual property rights. After analyzing the specifications of the BP series, it can be seen that the BP series IC is particularly suitable for BUCK topology. For example, the BP2812 output constant current accuracy is less than 3%, and the system power efficiency is over 0.93. one.

The manufacturer designed the BP2812 to be a low-power, non-isolated LED lamp with an output current of less than 0.135A. The characteristic of BP2812 is that it works in the critical mode of inductor current. Due to the patented constant current control technology, the constant current precision of LED lamp is good, it is not sensitive to inductance, and the pass rate and pass rate of mass production are good, which is beneficial to reduce. The total cost of the system for mass production.

However, the BP2812 has a small output current and is difficult to apply to a single 1W or 3W LED string. After analysis, the traditional BUCK inductor core only works in the [I] quadrant, but does not fully play the core [III] quadrant, and the dynamic range is limited to output a larger LED lamp current. 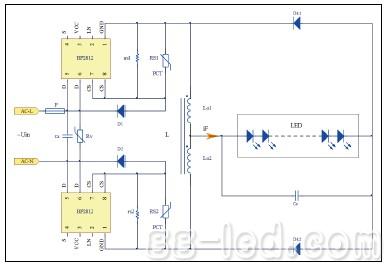 (Figure 1) Two pieces of BP2812 innovative bridgeless BUCK topology diagram For this purpose, we developed two BP2812, designed "bridgeless BUCK topology", to overcome the shortcomings of the traditional BUDK, give full play to the [I] quadrant of the magnetic core to [III] The role of the quadrant can output a large current, as shown in (Figure 1).

(Figure 1) IC1 and IC2 are both BP2812. Only the strong part is drawn in the figure. The weak part of the IC is temporarily omitted. The principle of the bridgeless BUCK topology is as follows:

1. When the input power supply is negative half-wave, L is the normal end, when N is the negative end, D2 shorts IC2, IC2 does not work; only IC1 works at this time.

2. When the input power supply is negative half-wave, N is the normal end, and L is the negative end, D1 shorts IC1, IC1 does not work; only IC2 works at this time.

3. Input power positive half wave, IC1 works, Î”tON conduction period, IC1 built-in 600V MOSFED conduction; IC1 can be imagined as Î”tON conduction period, IC1 D (5-pin parallel 6-pin) pole and S (7 parallel 8 The pin is short-circuited, the input power supply to the BUCK inductor L1 excitation iT1 flows into the same name end of L1, and then returns to the negative end of the input power supply via DK2, via rS2âˆ¥RS2, and through D2.

Due to the mutual inductance between L2 and L1, when the current end of L1 flows into current iT1, the mutual inductance current iT2 flows out from the same name end of L2, and it can be seen that the LED current iT is the sum of iT1 plus iT2. When IC1's current sampling resistor (rS1âˆ¥RS1) has a 0.4V threshold voltage, IC1 turns from conduction to load. At this time, it enters the Î”tOff period. Due to the L1 freewheeling, the BUCK topology Î”iT1 is formed to flow through the LED to DK1. Forming a loop, L2 induces current iT2, and also flows through the LED to DK2 to form a loop, and also realizes that the LED lamp current iT is a multiple current effect of the sum of iT1 plus iT2.

4. The inductor L core in Figure 1 can work between the [I] quadrant and the [III] quadrant, overcoming the shortcomings of DC biasing of conventional BUCK inductors. The magnetic core does not open the air gap, and fully exerts the magnetic effect of the magnetic core, and the volume and weight are small.

(Figure 1) To achieve the "bridgeless BUCK topology", when two BP2812s are powered by 1W (0.32A) LED strings, the temperature rise of IC1 and IC2 is very low, and the cost performance is better than the traditional BUCK topology.

For example, the inductor L in (Fig. 1) is designed as an â€œauto-coupled step-down transformerâ€, and the principle of â€œdouble current rectificationâ€ can be used to output a larger current to supply power to the LED.

We disign and manufacture Linear Actuators for  Medical Care, such as Medical Chair

The Linear Actuator for  Medical Chair with heavy load, where strong force is needed. It is very quiet, and strong.  Hall sensor for position feedback is available.

We disign and manufacture Linear Actuators for Message Bed.

U2 is the linear actuators which is widely used for medical care.