Detailed design of video processing system based on FPGA+DSP architecture

The system adopts a scheme based on FPGA and DSP for video processing, and realizes the whole process of video collection, processing and transmission.

In real-time video image processing, the low-level preprocessing algorithm processes a large amount of data and requires high processing speed, but the algorithm is relatively simple, and is suitable for hardware implementation using an FPGA, which can balance speed and flexibility. The high-level processing algorithm has a complicated structure, and is suitable for the implementation of a DSP chip with high computing speed, flexible addressing mode, and strong communication mechanism.

The biggest feature of the DSP+FPGA architecture is its flexible structure, strong versatility, and modular design, which can improve the efficiency of the algorithm. At the same time, its development cycle is short, the system is easy to maintain and upgrade, and it is suitable for real-time video image processing.

The whole system uses FPGA as the core control unit and completes the median filtering of the video signal. The DSP is used as the core processing unit of the whole system to perform JPEG compression on the captured video image information. In the video transmission unit, the USB based on PDIUSBD12 chip is designed. The bus is responsible for the transmission of video signals.

A complete video processing system is mainly composed of a video acquisition unit, a video processing unit and a video transmission unit. Make sure that the parts are seamlessly connected when designing the system.

The image acquisition unit is composed of FPGA and MB86S02 video acquisition chip, including video signal acquisition and preprocessing, converting the input video signal into digital image data that the system can process, and storing it in a certain storage area according to a certain format.

The image processing unit is the core of the system, and compresses the image data to realize the functions that the system has to achieve.

The whole hardware system is composed of two sub-systems, FPGA and DSP. As a video acquisition unit, the FPGA preprocesses the acquired video signal and transmits it to the DSP. The DSP as the image processing unit is the core of the system, and the pre-processed video of the FPGA. The image information is processed by JPEG compression. The performance of the DSP unit determines the performance of the whole system. After the DSP completes the image processing task, the result will be returned to the FPGA. The FPGA writes the compressed image information to the data buffer of the interface control chip. The interface control chip is responsible for the transmission of information. The overall block diagram of the system is shown in Figure 1. 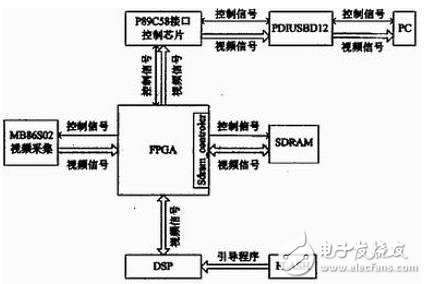 The software design of the system can be divided into two parts according to the overall division of the hardware structure. The operation of the whole system is shown in Figure 2. The respective programs of the FPGA and DSP run independently, and the real-time interaction of data is completed by the interrupt signal. The instruction from the FPGA to the DSP is to send an EDMA request through the FPGA. The DSP establishes an EDMA channel by responding to the EDMA request, and starts reading the data from the FIFO after preprocessing. When the DSP transmits data to the FPGA, it sends an interrupt to the FPGA. The signal is read out from the FIFO by the compressed image data. 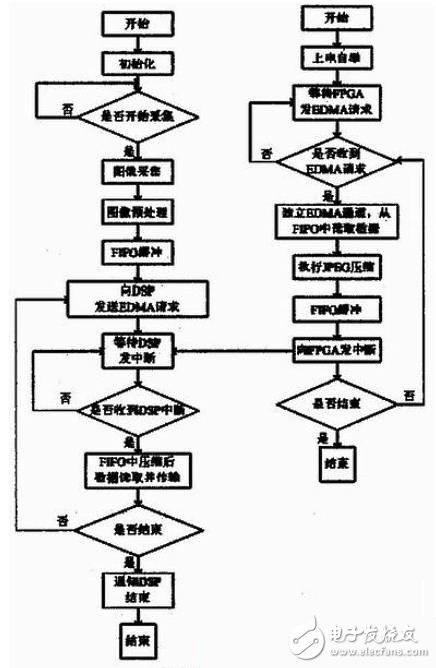 As shown in Figure 2, the whole system workflow can be briefly described as follows: After the system is powered on, the DSP first bootstraps by flash and runs the boot program, then transfers to the EDMA wait state, and waits for the external image acquisition command after the FPGA is initialized. After the image acquisition command, the image acquisition is started, and the acquired image is preprocessed. The preprocessed image is buffered by the FIFO. After storing a certain amount of data, the FPGA sends an EDMA request to the DSP through the half full signal, waiting for the DSP. In response, once the DSP receives the EDMA request from the FPGA, it immediately establishes the EDMA channel, reads the data from the FIFO to the L2 memory, and after the image is full, the DSP begins image compression. After waiting for an image to be compressed, the DSP will go to the FPGA. The interrupt signal is sent, and the FPGA starts to read the compressed image data from the FIFO after receiving the interrupt signal. After reading one frame of data, it is judged whether the encoded signal is valid. If it is valid, the next frame image is compressed according to the same rule, and if it is invalid, the DSP is notified to end.

This design has been verified by hardware, meets the predetermined design requirements, and realizes real-time processing of large amounts of data.

The system volume is only 70 & TImes; 70mm, the power consumption is less than 5W, the median filtering rate is 20F/S on average, and the JPEG compression rate is above 25F/s. Not only meets the real-time requirements of the video processing system, but also has small size, low power consumption, and FPGA-based programmability, the system has good flexibility and scalability.

The Internet of Things (IoT) is the network of physical devices, vehicles, batteries, home Appliances, and other items embedded with electronics, software, sensors, actuators, and connectivity which enables these things to connect and exchange data, creating opportunities for more direct integration of the physical world into computer-based systems, resulting in efficiency improvements, economic benefits, and reduced human exertions.
Our Battery Remote Monitor with IoT is direct integration of the battery restore solution and device  into computer-based battery monitoring system which combines wireless communication with patented, field-proven battery monitor and analysis technology. It not only has the ability to restore battery, but also has the ability to monitor battery's State-Of-Health(SOH) in real time.
Uptime is the most basic requirements in nowadays connected to all things in the world. Power systems rely on batteries to provide critical backup energy and power in sudden affairs. When power supply of normal grid is lost suddenly, the backup power systems must perform. Without proper monitoring of the back up power system status whether safe or not, there is a irreparable risk of catastrophic loss for Hospital institution, Telecommunication cost, financial organizations and even the army suddenly lost the war, etc.
How our Battery Remote Monitor IOT works? it is comprised of 3 base hardware devices and 1 software operation system. The monitor parts connected with batteries pack and reliably reports battery State-Of-Health(SOH) to the software platform.  Wirelessly enables these monitoring hardware to connect and exchange data with users in working to control the batteries status in real time.