October 21 12:15:31, 2020
3D printing has so far been limited to specific plastics, passive conductors, and several biological materials. But the Princeton research team has successfully printed 3D printed quantum dot-based LEDs (QD-LEDs), showing that different types of materials can be 3D printed and fully integrated into components with active device performance.

McAlpine and his colleagues from Princeton University have mixed five different types of materials to print the first full 3D printed LED.

In their report on Nano Letters, the researchers described the seamless interweaving of five different materials, including: 1) inorganic nanoparticles of photoluminescent semiconductors; 2) an elastomeric matrix; 3) An organic polymer as a charge transport layer; 4) solid and liquid metal leads; 5) a UV-bonded transparent substrate layer.

The research team's approach includes three key steps. First, determine that the electrodes, semiconductors, and polymers have the desired function and are rendered in printable form; then, carefully ensure that these materials are soluble in the orthogonal solvent to avoid damage to the integrity of the underlying layers during layer-by-layer printing; The interwoven pattern of these materials is achieved by direct assignment on the CAD design.

Technology Tech ExtremeTech reported that the research team used a 3D printer developed by itself, "off-the-shelf 3D printers are not qualified for this job," said Ryan Whitwam of the research team. â€œIt took us more than half a year and $20,000 to make the 3D printer we needed.â€

The bottom layer of each quantum dot LED is made up of silver nanoparticles that connect the LEDs to the electronic circuitry. At the top are two polymer layers that push the current up to the next layer. Here are the real "quantum dots" where they are nanoscale semiconductor crystals, cadmium selenide nanoparticles encased in a zinc sulfide shell. Whenever an electron strikes these nanoparticles, they emit orange or green light. The color of the light can be controlled by changing the size of the nanoparticles. The top layer is a relatively common gallium indium phosphor material used to direct electrons away from the LED. 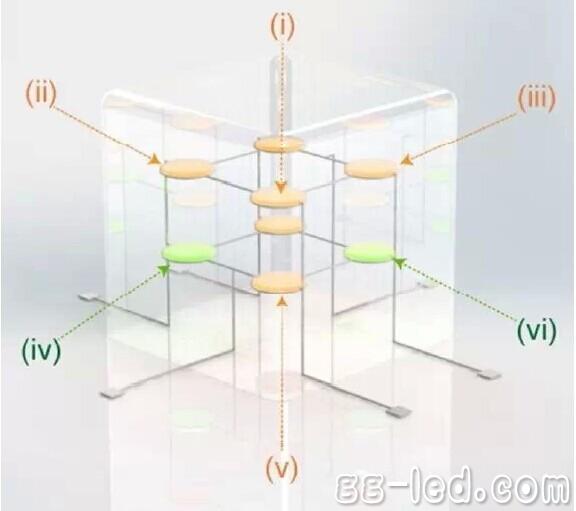 As a proof of concept, the research team 3D printed one of the quantum dot-based LEDs (QD-LED, based on cadmium selenide nanoparticles, zinc sulfide shell, top layer of indium gallium), the QD-LED exhibits pure and adjustable color Luminous properties.

By further incorporating 3D scanning of the surface topology, the research team can also print QD-LEDs onto devices with curved surfaces, such as contact lenses. 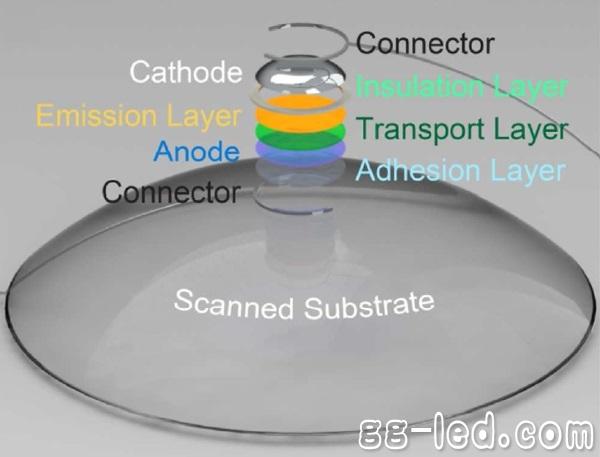 The third example shown by the research team is a packaged LED 2 Ã— 2 Ã— 2 cube, it is understood that each component and electronic device in the cube is 3D printed. This proves that this new architecture, which is difficult to accomplish using standard micromachining techniques, can be built with 3D printing.

Overall, the research team said the results show that the application potential of 3D printing is much broader than we already know and can integrate many different types of materials. 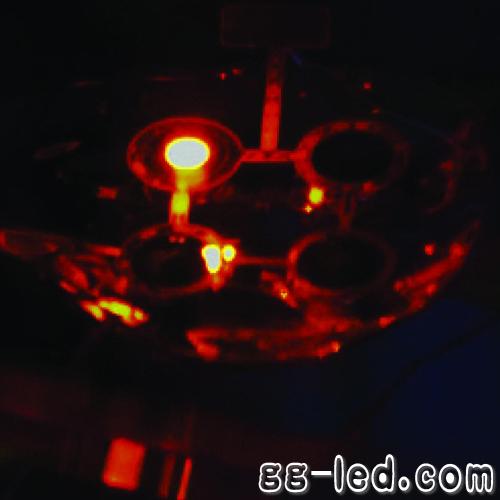 "We expect this general strategy to be extended to 3D printing of other types of active devices such as MEMS devices, transistors, solar cells and photodiodes," said Professor McAlpine. â€œOverall, our results showcase some exciting applications, including geometrically tailoring devices that contain LEDs and multiple sensors, providing new tools for studying the optogenetics of neural circuits.â€

Simultaneous 3D printing of active electronic components and biological constructs may lead to the emergence of new biomimetic devices, such as prosthetic implants that stimulate nerve cells by light.

According to the research team, their future work will focus on solving some key challenges, including: 1) increasing the resolution of 3D printers to enable them to print smaller devices; 2) improving the performance and printing speed of printing devices; Integrate other types of nanoscale functions to form modules and devices, including semiconductors, plasmonics and ferroelectrics.